5 Sophisticated Black Kitchen Ideas For You 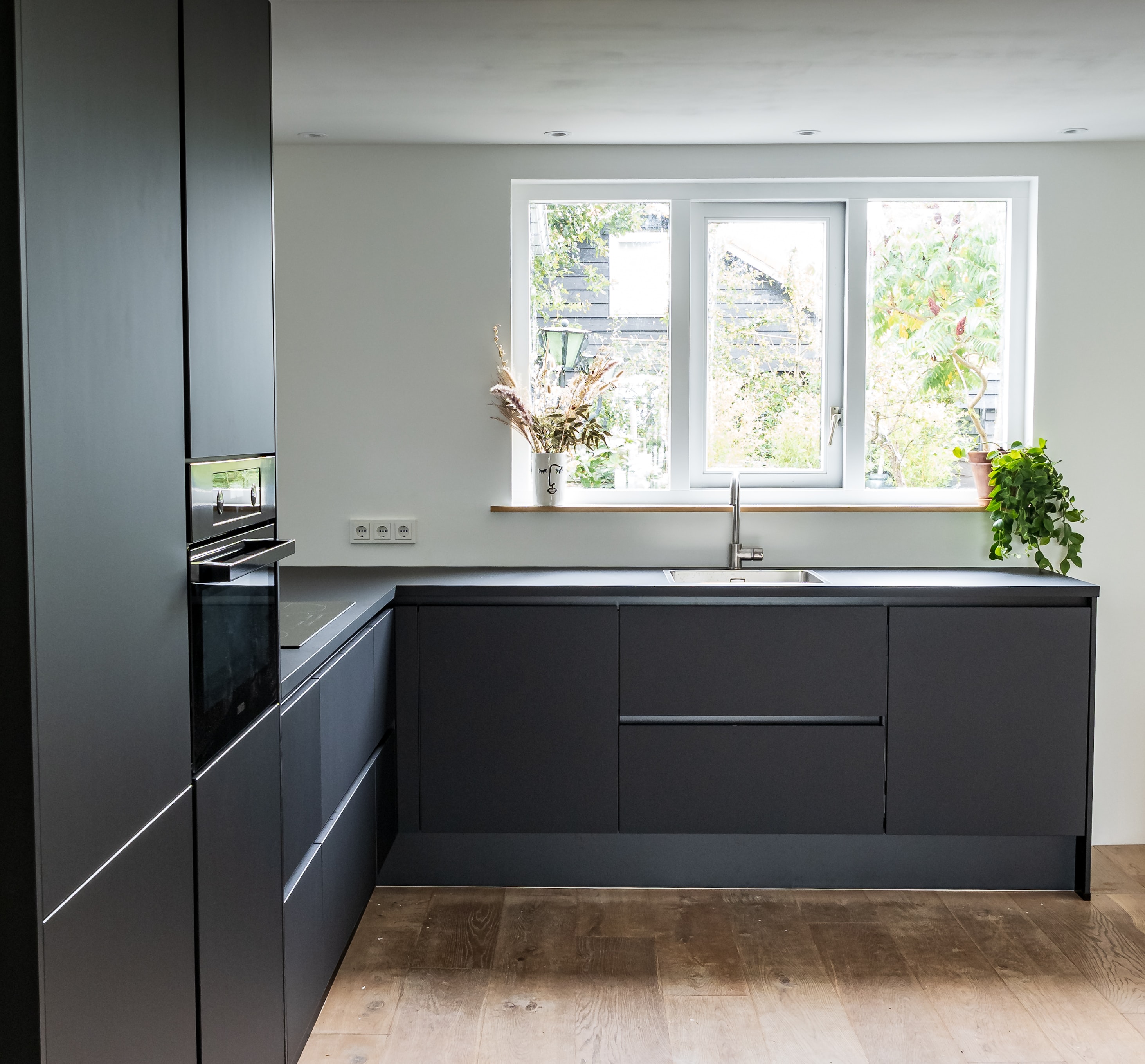 Suave and sophisticated can be your wise pick of adjectives when you are thinking of black for your kitchen design.

It goes back to 2015 when contemporary designers started replacing the classic “white” with its opposite shade. From a choice of marble, tiles, and even appliances, come-of-age homeowners were taken by “black”. Design manufacturers followed suit.

What followed was a frenzy for black kitchen cabinets as a primary element of decor, thereby ousting the color white as a thing of yore. Hard to imagine a color that has been the classic choice for the American dream kitchen since World War II.

The possible reasons why black became the flavor of the season could be a mix of the following:

• Compact city apartments - When compact homes came into being, natural light became quite an issue. While some were blessed to have a sun-kissed culinary corner, others complained about their kitchens being readily dull and boring. It is at this crucial juncture where black and similarly dark shades seamlessly matched the vibe of such spaces.

• Great contrast - Being a dark color for just about any item, like countertops, cabinets, islands, black struck great contrast to other decor materials, like French pottery and broken subway tiles. Undoubtedly, black for many was the bold choice for their kitchen and was largely said to have been driven by the sudden popularity of the industrial style; converted factories and farmhouse-inspired styles with exposed pipes and beams as well as iron and wood in a striking combination.

• The Downton Abbey Effect - A large number of customers are turning towards technology to govern their kitchens, thereby craving tactile user experience and the finest craftsmanship. Such a penchant was termed the Downton Abbey Effect, as darker shades would conjure images of cast iron and black marbles to match the vibe of kitchens dating back to 1930.

In essence, black no more represented what was mundane or unwanted.

Instead, it harbored reverse aesthetics, thereby becoming a popular choice for kitchen design.

This post takes a dig at five inspiring black kitchen ideas to make things stand out.

Do you envision your kitchen to be mysterious yet retain a modern vibe?

Well, then it's time to go all black–from cabinets, walls, and accessories, and keeping things as minimalist as possible holds the key to a successful design.

You see, such a setting renders black to be an all-pervasive and immensely powerful color dominating the entire space. Plus, the omission of multiple elements ensures a cohesive structure, something that uplifts the aura of your kitchen.

Take black kitchen cabinets to go with a chrome finish, for instance. This striking combo readily makes way for a dialogue that empowers the whole setting– at one end, you got a shiny finish, and on the other, a matt, sober one.

If you are looking for a budget fix, why not paint your existing kitchen cabinets black and install a few LED lights underneath to make it a statement piece?

Going all black might not be up to everyone's taste.

Thus, for all those who still fancy a black kitchen, matching tiles and floors can be a sensible way to take things forward.

Quite frankly, it's a refreshing take to break the monotony with a monochromatic approach. One can choose from either geometric or abstract designs to make a statement out of your culinary space.

The significant consideration is wisely choosing your kitchen furniture to fall in line with your preferred theme for a cohesive outlook.

3. Textural Variations Can Do Wonders

Simply put, textural variations are nothing but a careful mix and match of several different elements in one place.

Take statement pendant lights paired with brick walls for instance, that can take your black kitchen aesthetics up a notch.

Undoubtedly, it's easier said than done, and you might have to invest in hiring a skilled interior designer to breathe life into things. This is solely because textural variations demand you overpower several designing elements in one frame and still manage to keep things simple, like classic wooden floors.

While black kitchen cabinets can, at times, seem one-dimensional, embracing pastel shades can shake things up.

Offsetting black cabinetry with shades like blue and green can be downright refreshing. Also, adding gold accents in the form of pendant lights and custom hoods can add to the oomph quotient.

Got a country-themed kitchen?

Take advantage of your layout and bring in a couple of floor-to-ceiling windows to augment natural sunlight kissing your black kitchen cabinets. The outcome is a picturesque kitchen that also packs minimalism at its best.

For anyone looking to embrace an all-black kitchen for the very first time, modularity should be the entry point.

With a modular kitchen in place, one can mitigate the pitfalls of designing-when you're too afraid to go all in, from black kitchen cabinets and matching tiles and floors, then you can always take a step back by introducing accent colors.

Undeniably, an all-black kitchen resembles the much coveted little black dress in the fashion world. Yes, we are talking elegance, minimalism, charm, beauty, and above all unique appeal to stay in vogue.

Cabinet DIY © 2023. All rights reserved.
Powered By OC and DMC